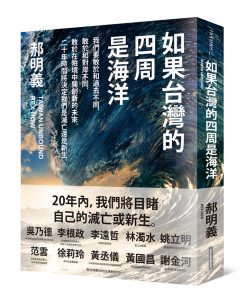 “The accounting law being sent to the Legislative Yuan with missing words, The Office of the President allowing a mentally disturbed woman to walk up to the fifth floor, the prolonged scandal of plasticizer and cooking oil, Taoyuan International Airport allowing a live cat in luggage to pass security, the Apache incident with the socialites, and the Cross-ministerial Committee’s efforts in improving the economy but achieving the opposite results… What do all these news events tell us?”

The book opens with a foreword written by Rex How, explaining the origin of his book. Then, at the beginning of the first chapter, the author brings out several seemingly unrelated news events and ends by summarizing his observation of the biggest problem that Taiwan is facing: “The government operations have been paralyzed and the administration has collapsed.”

As an important figure in the publishing industry, Rex How became well-known two years ago when he “fired the first shot” in the Anti-Black Box Curriculum Movement. Taiwan Unbound is a book he wrote in the past two years after he resigned from his position as a National Policy Advisor due to the protest against the policy changes. It is a book to reflect on the reality and future of Taiwan.

How says that Taiwan has not only come to the age of media, but also to an age of civic action. An age where everyone is a great reasoner and analyses the root causes of their own society’s problems and looks to improve them.

The book not only combines How’s own vision and long-term observation of Taiwan’s Cross-Strait relations, but also interviews many people from different age groups, especially those in their 20s and 30s. The book reflects his strong arguments. Similar to detective fiction, there are clues and patterns that gradually reveal the root causes of the internal and external problems that have plagued the Taiwanese people for years.

Rex How says, “When many people hear the title of the book Taiwan Unbound, they all ask ‘We are surrounded by oceans, aren’t we?’ ”

Geographically yes, he says. But psychologically and consciously, we are not. Due to several reasons, Taiwan is clearly in the middle of the ocean, but has turned its back to it for a long time. This is leading us to forget the adventure of exploring the oceans, and we are stuck with the conservative mentality of village farming. We cannot see our resources despite being in the midst of abundance. Instead, we are creating more and more destruction along the way that will eventually lead to trouble, or even despair.

How says he has heard many people around him feel pessimistic about the current situation in Taiwan. He says that the recent outbreak of problems in Taiwan is still a small matter, the most serious issue is that Taiwan has been suffocating itself with the accumulation of all those problems and old habits. Therefore, he believes that the next twenty years will not only be a critical period for Taiwan to witness its own demise, but also its possible rebirth.

This book is divided into three parts:

The author summarizes the political, economic and social problems that have accumulated over the years and explains why it’s about to explode. These fears come from:

The author wrote in the first part: “Conclusion 1: An independent ATM,” pointing out that political party figures have repeatedly incited independence and aggravating the blue-green struggle due to their laziness. Political parties use independence as an ATM when they run out of cards to play. It is an attempt to divert anger from their own incompetence by creating confrontation through the supporters’ dislike of the other side’s color.

In addition to the direct interview with the presidential candidates, Rex How called on the political party figures to change. He also reminded that this kind of apparently confrontational thinking is in fact a land-based thinking. However, if you switch to an ocean-based thinking: “Although there are different topographies of deep grooves and shallow beaches, everything is contained under the wide surface of the sea. Different areas of the sea have different color variations but these waters are not separated nor confronting each other. They coexist and communicate with each other, only showing different colours with the change of time and light.”

Part II: “The Sum of Hopes”

Based on the author’s observations and interviews, he concludes that Taiwan is also bursting with new hopes. These new hopes lie in:

In the third part of the book, How reviews and organizes his journey from the Anti-Black Box Curriculum Movement, to the Sunflower Movement, to the period before the November 29th’s Elections. “Civic action requires discourse and power of words.” The author says, “I hope to share my experience on the Anti-Black Box Curriculum Movement as a case study for everybody’s reference.” How has compiled more than ten published articles, each with “background information” to explain the motivation and focus of writing at that time. He also added a section of “subsequent development” to explain what happened after this article so that it could be used as a reference for other citizen activists.

Solvers should have respect for the questioner.

The answer would only appear when we face different challenges and dangers.

Click the icon to add to your Google calendar and receive any updates.

Use this url to add to your iCal calendar.
https://bit.ly/3fBzjza

Press the icon to download the complete program schedule.

For Early Announcements And More